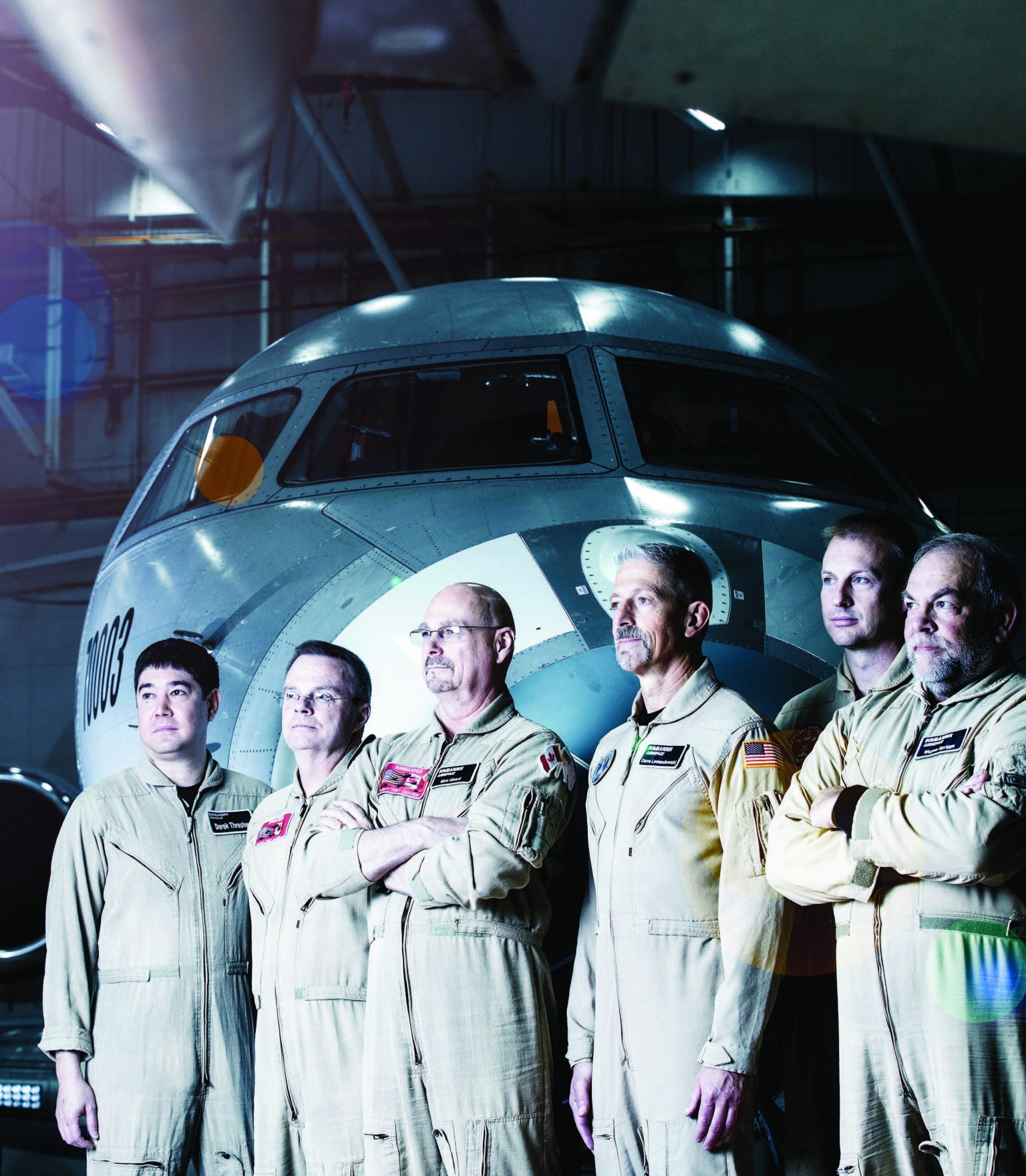 Telluride Regional Airport, the highest commercial airport in North America, wears the peaks of Colorado’s Rocky Mountains like a crown. It was winter 2017, and a Bombardier Global 7500 jet sat on the airport’s lone runway, the wind flapping and howling around it. At an elevation of over 9,000 feet, it was an impressive airstrip to say the least. A crew of two flight test pilots and a flight test engineer (FTE) approached, having just reviewed the safety of flight information—a comprehensive report prepared by the support crew to ensure the plane was ready for the test. It was time to put the world’s largest and longest-range business aircraft through its paces.

Game-changing models like the industry flagship Global 7500 jet, as well as the class-leading Global 5500 and Global 6500 aircraft, call for extensive and arduous testing: thousands of flight hours, countless envelope-pushing scenarios, and a large and dedicated team built on a wide range of skills and experience. While the unit is based out of the Bombardier Flight Test Centre (BFTC) in Wichita, Kansas, it’s their job to venture to challenging locations like Telluride to help the company’s new aircraft achieve certification.

There are 20 flight test pilots at BFTC, mostly from various military backgrounds. “It’s crucial that a test pilot understands the operational context of the aircraft they’re testing,” explains Richard Ling, formerly deputy chief test pilot at BFTC. “Especially when it’s an aircraft or system that’s early in its design phase.” Compared to a line pilot, who typically operates certified aircraft by the book, test pilots like Ling are the ones writing the book.

“This demands a totally different philosophy,” says Ling. “Sometimes, to get the data we’re looking for, we’re flying an aircraft in a flight regime that it has never been in before. While we’re doing that, we have to keep a critical eye on everything: Are the conditions safe? Do the current proposed procedures work? Is the design compliant with the regulatory requirements? And, of course, you need to have the integrity to stop the procedure if something’s not quite right.”

Integrity is at the heart of Bombardier’s flight test programs. When the Global 7500 jet was certified last year, it had a rigorous 21-month program of 2,700 flight test hours under its belt. That’s almost 130 hours a month—a great success for the team. Between advances in safety regulations and heightened customer expectations, certifying an aircraft as sophisticated and technologically advanced as the Global 7500 jet was a stringent process. But Ling and his team are happy to play the long game: “It’s the advances we’ve made in testing procedures and technology that enable us to squeeze all those hours into just 21 months,” he says. “We have many more simulation assets and design rigs, so when it comes time to actually conduct a flight test, we’re dealing with a relatively mature design.” Most test programs are roughly 80 percent design and evaluation on the ground and only 20 percent in the air.

It also helps that the pilots work closely with the specialist engineers and FTEs. At least one FTE will accompany two test pilots for each flight—sometimes, when the test procedure is particularly high-risk, a mission control-style team of engineers on the ground will use telemetry to monitor the flight crew, communications and data in real time. “Having a group of people monitoring the parameters of a particular risk or procedure gives us multiple points of view, sometimes even perspectives that the individual FTE on board can’t provide,” says David Behn, flight test manager at BFTC.

Safety is an integral part of BFTC’s philosophy—for both the customer and the flight test crew. Test procedures go through a thorough safety assessment that identifies the potential hazards and the mitigations that can help minimize or even eliminate them in flight. “If we determine that a test procedure is too risky, then we need to find a different way to collect the data we’re looking for,” says Behn. “We don’t want to put the crew in harm’s way. This is why we often turn to telemetry, as it allows additional time-sensitive monitoring and oversight.”

A great example of this is when the team tested the Global 7500 jet’s maximum operating limit speed. Flying to speeds approaching Mach 1, all hands on deck—both on board and on the ground—were needed to demonstrate that the airframe would hold up to near-supersonic speeds. This required disabling the safety override software of the fly-by-wire flight control system which would stop pilots in operational service from ever approaching that limiting speed. They then had to fly various critical upset scenarios to show that the aircraft, with the fly-by-wire flight control system operational, would provide protection even at the very edges of its envelope. “That type of testing requires a lot of airspace and a lot of monitoring,” says Ling.

Innovation is an iterative process that goes hand-in-hand with testing. In the early stages of the Global 5500 and Global 6500 test program, long before certification, the Flight Test Centre played a key role in the evolution of the wing design.  Take the re-profiled wings’ trailing edge, for example: after extensive modeling and analysis of the wings, Bombardier engineers developed a design that would enhance their aerodynamics. After calculating the potential benefits in terms of fuel performance and speed, they relied on test pilots to test—and ultimately prove—the theory by tufting the aircraft’s wings for flight. Tufting is a common procedure where air flow direction and strength are analyzed using strips of yarn arranged in a grid pattern on the wing.

The Flight Test Centre has a running mantra: same, but better. Testing the Global 5500 and Global 6500 aircraft was less about reinventing the wheel and more about building on the strengths of their predecessors.  Not only is this a far more efficient and effective way to innovate—it’s also a lot easier on Global owners and operators transitioning to the next generation. This is perhaps the aircraft’s most important innovation of all: by focusing on many subtle but meaningful performance upgrades, the pilot experience is reassuringly familiar—with added benefits. “When testing the Global 5500 and Global 6500 aircraft, we wanted to make sure it felt like a Global 5000 and Global 6000 aircraft,” says Ling. “That’s the first impression, then the benefits of each aircraft’s new technology—the higher speeds, the fuel flow—start to reveal themselves, like a pleasant surprise.”

Upset scenarios make for some fascinating and often creative test programs in all kinds of conditions. In Colorado, for example, Ling and his team used the high-altitude airports to test continued single-engine takeoffs in draggy configurations (gear down, flaps out, etc.). They also took the Global 7500 jet to icy Iqaluit, Nunavut, and the aptly named Thermal, California, to ensure the aircraft could withstand extreme temperatures and weather conditions. For more precise weather testing, the team went to the McKinley Climatic Laboratory at Eglin Air Force Base, Florida, where they tested the aircraft’s performance against pinpoint temperatures and cloud densities.

Last year, Bombardier set an industry benchmark with the Global 7500 jet program’s water-ingestion testing. Regulations stipulate that the aircraft must prove it is able to take off and land on runways “contaminated” with standing water. The test involves simulated takeoffs and landings over troughs filled to various depths to demonstrate that the water plume and contaminated runways don’t pose a hazard to aircraft operation. The team conducted these tests in March 2018 at the Shuttle Landing Facility runway at Kennedy Space Center—a first for a civilian flight test centre. “It was ideal for safely simulating these takeoffs,” says Ling. “We chose the longest and widest runway we could and put the trough right in the middle. We didn’t find any issues in the end, but it was nice to know we had lots of spare runway to allow simulated landings, and didn’t need to commit to the takeoff. We could always immediately—and safely—stop to inspect the aircraft.”

It takes a top-notch group of skilled professionals to make sure a new aircraft is ready for the world, and Bombardier’s flight test team is behind every aircraft launch every step of the way.