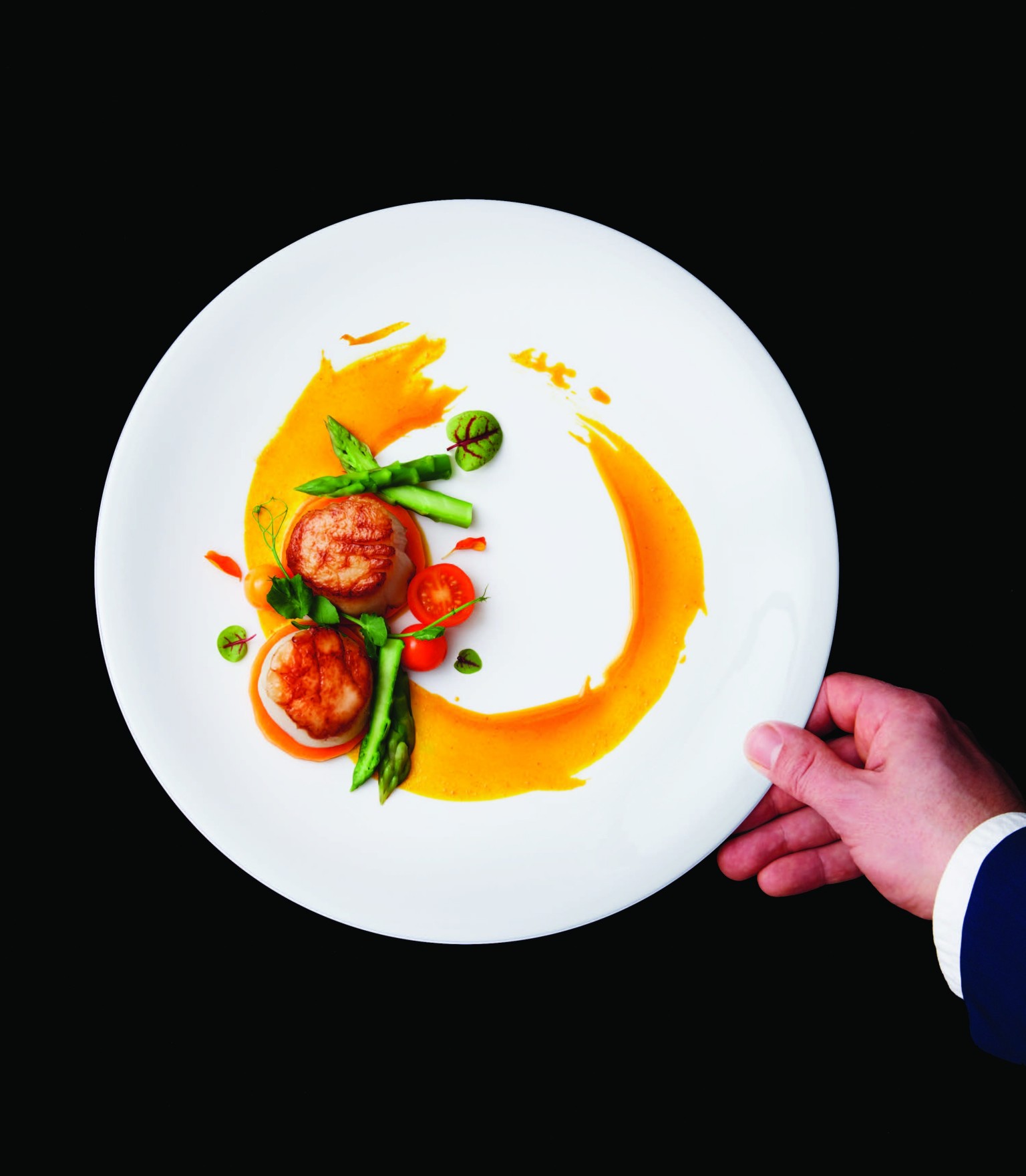 Seared scallops, blanched asparagus, a tomato reduction and even microgreens can be stored and prepared at 51,000 feet.

The innovations of legendary chef Ferran Adrià have long been at the forefront of food culture, from redefining molecular cuisine to launching El Bulli 1846, a museum and research lab set to open in 2019 – and his vision for restaurant design is no exception. “When people arrive at El Bulli, everybody goes through the kitchen. It’s a way of making them feel at home,” he said of his most famous, multi-Michelin-starred restaurant. This ethos can also be found on board the Global 7500 business jet. In fact, the aircraft’s kitchen is more than just a place to prepare meals at 51,000 feet – it is redefining the world of in-flight dining.

In order to create the largest and most well-appointed kitchen in the industry, a team including Alexandre Curthelet, one of Bombardier Business Aircraft’s industrial designer leaders, consulted the world’s top flight attendants: the crew members who take care of every passenger meal, from buying fresh ingredients to arranging bouquets. Like the best chefs and critics, they know an unforgettable meal is about more than just getting food to the table. It involves every sensory detail.

While private travel transformed the reputation of in-flight dining, there are still some tips chefs and crew keep in mind when preparing food on board. Low humidity and reduced air pressure can inhibit smell and taste receptors, as well as slow down diners’ metabolisms. Solutions include serving lighter, spicier dishes with umami notes such as mushrooms, olives and, yes, tomato juice. When it comes to wines, bolder is often better – and champagne is always a good choice. As any restaurateur knows, the venue also greatly affects the quality of a meal. Thanks to the Global 7500 jet’s kitchen design, its unparalleled smooth ride and industry-leading cabin experience, every meal is a carefully curated exercise in good taste.

Like Ferran Adrià, Curthelet’s team was acutely aware of the kitchen’s new role in contemporary cuisine, one that goes beyond functionality. “In modern houses, you throw a party and everyone ends up in the kitchen,” observes Curthelet. “We hoped to give this kitchen the same feel, to make it seem like the kind of place where you would want to gather. The kitchen isn’t just part of the aircraft, it’s a bridge between the crew and passenger zones, and the first thing you see when you enter.” Rather than greeting passengers with a wall of veneer, his team created a focal point with warmth and ambiance. They focused on smart lighting design and used natural materials such as hardwood flooring, eschewing the standard synthetics.

Another detail inspired by interior design trends: sleek appliances custom-built with suppliers and worth showing off. It’s a significant departure from the usual galley inserts, bought off the shelf and then strategically hidden. These state-of-the-art amenities work together to turn in-flight dining into more than a quick bite between home cooking and a restaurant: It is a memorable experience in itself. Convection and steam ovens don’t just heat prepared food, they can be used to create five-course meals from scratch. The coffee/espresso machine rivals those in a passenger’s favorite cafés, whether they’re based in Sweden, Kenya or Colombia. And while one refrigeration unit chills ingredients, an optional second space is ideal for cooling the finest wines to their ideal serving temperature. There’s also a startling amount of storage space, leaving more than enough room for bespoke dinnerware and crystal for any and all potential guests. After all, the Global 7500 jet is equipped to seat up to 19 passengers and crew.

What’s impressive about the kitchen is not only its size, but also its layout. The design is nothing short of a portrait of epicurean efficiency. “It looks simple, but a lot of thought went into that simplicity,” reveals Curthelet. The kitchen is conceived to flow from prep to plating to serving to cleanup, like culinary choreography. The ovens, for example, are positioned furthest from the cabin threshold, allowing the crew to serve passengers with ease while attending to a cornish hen or pork shoulder that needs basting. Appliance doors open toward the cockpit, allowing easy access to the countertop at all times for crew. An additional bonus for today’s demanding diners, not to mention Top Chef fans: The sink is embedded in a notably large countertop and can be covered to create additional prep room. It also creates the perfect space for artful plating, whether adding a dash of truffle salt or a dollop of crème fraîche. As Curthelet notes, crew members not only pick up meals from customers’ favorite chefs and restaurants around the globe, but learn how to recreate them on board.

Just as the kitchen allows menu creation without compromise, the cabin’s four separate suites let passengers dine how and where they want. The master suite makes breakfast-in-bed an especially tempting option. The conference suite’s two tables join with a leaf to create a banquet dining experience for six, perfect for a family dinner. And desserts or snacks are best served in the entertainment suite, where a berthable divan, stand-alone media cabinet and large screen TV offer an in-flight living room. In the end, there isn’t a space on the aircraft that doesn’t rival the comforts of home. And it all begins with that first step inside the Global 7500 jet – the first taste of an aircraft that offers a true home in the sky.

The Global 7500 aircraft garnered a Red Dot Award: Production Design 2018, a prestigious international prize founded by Design Zentrum Nordrhein Westfalen in Essen, Germany. The Red Dot Awards have existed since 1955 and the distinction, bestowed by a jury of some 40 international experts, is considered one of the most sought-after quality marks for design. The Global 7500 business jet was recognized as a game-changing aircraft, establishing the new gold standard for private jet travel even before a single production aircraft has taken flight. Bombardier designers were singled out for reinventing every detail of the interior to create a deeper, richer, more refined experience. The Global 7500 aircraft not only demonstrates extraordinary design quality, but also shows that design is an integral part of innovative product solutions.