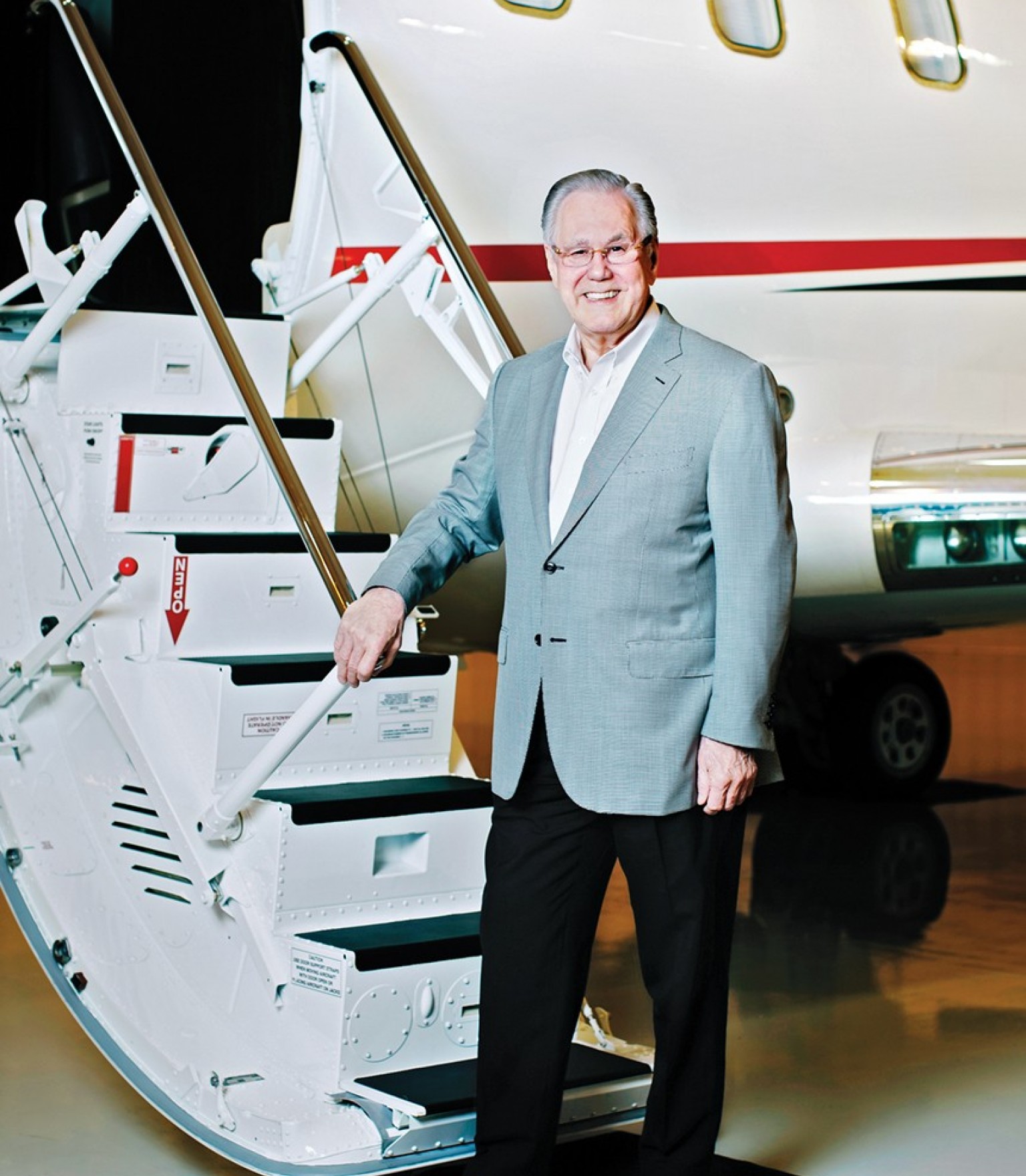 Michael J. Bailey refuses to retire. The Charlotte, North Carolina-based exec tried it back in 2006 and it didn’t take. He rebounded from the experience so hard that two years later he cofounded Elior North America, a booming food-services company, and eventually sold his stake to a multinational while staying on as its CEO. Bailey has now been the North American Chairman of Elior Group since 2013, helping the contract catering company to expand by acquiring 22 other food-service companies and increasing revenues to $1.5 billion annually. He is also Chairman of Davinci Jets, a leading aircraft management company offering turnkey services for private aviation. We caught up with him between courses to learn his recipe for success.

You grew up in a London suburb and left school at 15 to cook, working your way into demanding yet satisfying jobs. Then, you went back into institutional food service after graduating from culinary school. Why?

I left school at 15, and I worked at Ford’s European HQ as a trainee chef. Simultaneously, I had two other jobs: working in a hotel kitchen three nights a week and running a local restaurant kitchen for Saturday dinner and Sunday lunch service. So, I have experience in each sector, and there’s no question in my mind—either then or now—that you have far better managerial career options in contract food service versus the sexier alternatives. I’ve always loved the variety, job options and opportunities that occur in the contract side of the business. I’m one of those fortunate guys that gets up in the morning and loves to go to work.

You had a head-to-head moment with a very famous figure in business early on in your career. What was that encounter like?

My food-service career very nearly came to an abrupt end when I was working in the kitchen of the directors' penthouse at Ford Motor Company. On this particular night, I was cooking for two of the company’s directors. One of them came into my kitchen smoking a huge cigar. I looked at him and said: “Hey mister, there’s no smoking in my kitchen!” This very well-dressed man strolled over and said: “Son, this is my kitchen.” It was Henry Ford II, who, at the time, was chairman of the board.

Over the next few decades, you filled managerial, directorial and chief executive roles before taking early retirement in 2006. How did that inform your trajectory?

After three months [of not working], I was climbing the walls and driving my wife mad. The quote I always remember from her was: “How would you like it if I stood in your office 10 hours a day, every day?!” We were living in Switzerland at the time, which was great when we traveled a great deal, but pretty quiet when we did not. So, we returned to the United States, where I—along with a private equity partner—acquired three separate food-service companies and started again. This was in 2008. Twelve years later, I’m still Chairman of the company [Elior Group North America], and its largest independent shareholder.

The latest phase of your life started when you purchased your own private aircraft.

I looked around for the safest, most economically efficient, comfortable plane with a range that could get me to Europe, as I still have family there. There’s no doubt in my mind, this plane is the Bombardier Challenger 650, so l purchased a new one. I then looked around for a management company to take care of it for me. l came across Davinci Jets, a Charlotte-based management company that operated about 24 planes and had been in business for over 15 years. During the interview process, I thought: this is a great little business with terrific potential and excellent people. I felt my business experience could help them, and what they had created could be taken to the next level with investment. So, I acquired the business two years ago [Bailey is also its Chairman and majority shareholder] and have not been disappointed since. The business is doing well financially, growing double digits organically and expanding geographically—and my passion for aviation has continued to grow.

Can you imagine a life without work?

No, I cannot imagine life without work and I don’t intend to try again. My job and my kids keep me young.

New York City, Turks and Caicos, and my mother lives north of London, not far from Stansted Airport. I can fly from North Carolina to Stansted non-stop.

I worked hard in an industry that had high labor turnover: If you stood there long enough, you got the opportunity. In my mind, success is about stamina. When other people throw in the towel, I don’t.

Experience has taught me that momentum is significant in dealmaking and is often the difference between winning or losing.

The most recent book I read on my plane was Me, by Elton John. Elton was born two streets from me in Pinner, a small town in the London suburbs. He is a couple of years older than me, but I used to watch him play during his early career in the 1960s when he was a member of Bluesology with Long John Baldry and Rod Stewart. I saw him again a couple of months ago, and he gets better with age!