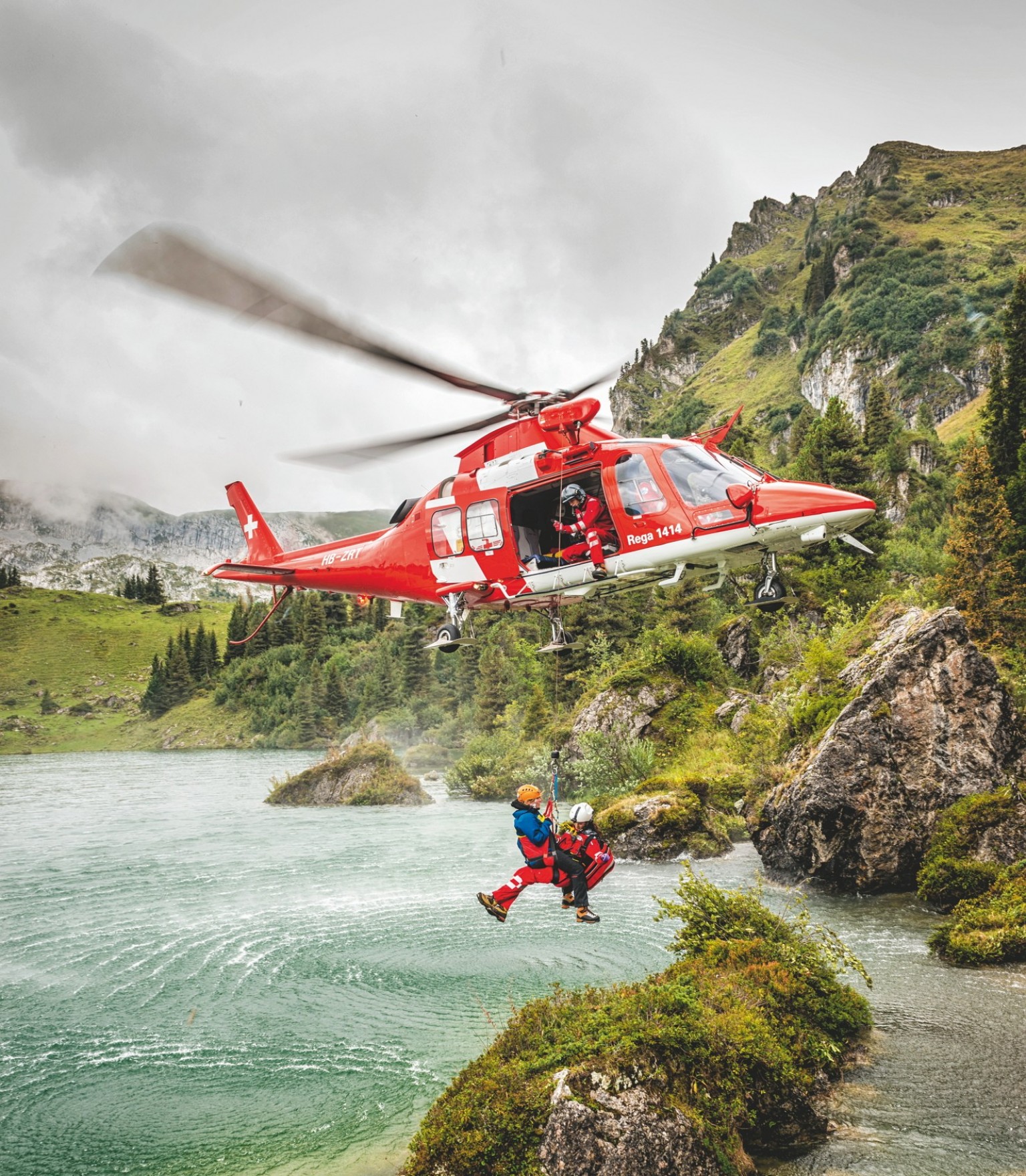 While Rega’s Challenger jets are ideal for repatriating Swiss residents, helicopters are also deployed for accidents in the Alps.

Daris was only a couple of days old when he took his very first plane ride. Born prematurely in Austria while his Swiss parents were on vacation, he weighed barely four pounds and needed intensive care immediately.

Unsure of how to transport him home safely, his parents contacted Rega, a privately run nonprofit foundation that offers air emergency services within Switzerland and to Swiss citizens abroad. A medical team studied how to best repatriate Daris. They decided on one of Rega’s Challenger ambulance jets. Despite the risks of the changing altitude, the flight would be a much smoother trip than traveling by road, where abrupt movements and vibrations are potential causes of injury.

Daris was transported in a special travel incubator which kept his body temperature stable and gave doctors the chance to monitor his vital functions – all on board a Challenger 604 aircraft, with his mother sitting just across the aisle.

Once in Switzerland, the baby spent a few more weeks in the neonatal ward of a hospital before finally going home. The mission was a success.

“In each deployment there are emergencies and people’s destinies at stake,” says Rega CEO Ernst Kohler. “Every single one is important.”

In 2017 alone, Rega’s jets and helicopters carried out close to 16,000 lifesaving missions. Most happen in Switzerland via helicopter in cases where the response needs to be immediate – a hiker collapsing along the Segnas Pass, a skier breaking their leg on a piste. Ambulance jets are usually deployed abroad, when the incident is less time-sensitive but equally delicate – a scooter accident in Corfu, a car crash in Bangladesh – repatriating Swiss residents from around the world and providing intensive care along the way. (The foundation also lends its ambulance jets to private insurance companies worldwide, which, along with private donations, helps finance operations.)

Rega’s history is deeply connected to the snow-capped Alps that constitute a large part of the Swiss territory. The first mountain rescue by helicopter took place in 1946, and the Swiss Air-Rescue association was officially born in 1952. The name Rega is a combination of the association’s name in Switzerland’s three main languages: “RE” from German (REttungsflugwacht), “GA” from French (Garde Aérienne) and Italian (Guardia Aerea).

Kohler, who holds the rank of colonel in the Swiss Air Force, has been CEO since 2006. As a former airport manager, as well as a mountain guide and rescuer, he was a natural fit for the company.

“Already, in the beginning stages of my work as a mountain rescuer, I was fascinated by the combination of personal skills and technology. I would have never dreamed of all the technological possibilities we have access to nowadays.”

Challenger jets are also a natural fit for the missions, and have been part of Rega’s fleet since 1982. Rega currently operates three specially equipped Challenger 604 jets (along with 18 helicopters), and is set to replace them with three brand-new Challenger 650 – the first of which was delivered in April, 2018.

“We entrusted an interdisciplinary team with finding a suitable replacement, comprising experts from the fields of aviation, medicine and medical care, and this team chose the Challenger 650 out of 60 different jet types,” explains Kohler. “In the last 14 years our Challenger 604s spent over 15,000 hours airborne and performed 7,800 landings – per jet! As far as I know, no other Challenger jet has done this before.”

The main factors the team considered included maintenance, reliability and size. Reliability is decisive because Rega operates its jets around the world, 365 days a year, and needs to react quickly whenever it is alerted via phone or mobile app. The Challenger 650 will have several advantages over its previous model, including higher-thrust engines that ensure a shorter takeoff distance and the capacity to fly farther.

Size is important because the jets have to be equipped in order to transport up to four patients at a time – two in intensive care units, lying down – as well as medical staff. The Challenger’s expansive cabin allows standing room for staff seeing to patients throughout the journey. Kohler recalls that when the tsunami hit Southeast Asia in 2004, Rega managed to safely fly 14 patients back to Switzerland.

While the Challenger 650’s sleek cabin design and in-flight entertainment are often deciding factors for owners, when Rega’s new fleet is delivered the aircraft will be virtually empty. Swiss aircraft completion company Aerolite will be in charge of outfitting the cabin, while Canada’s Flying Colours will take care of integrating medical equipment, which includes monitoring devices, suction pumps, respirators and oxygen cylinders, as well as a three-piece ramp that accommodates a stretcher trolley. A made-to-scale plywood mock-up of the cabin was built in order to plan and test the space in real life, allowing necessary adjustments to be made ahead of time, including incorporating wider beds. Other important modifications for Rega air ambulances include reducing noise in the cabin with a special assembly method that lessens engine-induced vibrations – vital for delicate patients like Daris.

Stories like his, successes born of shaky starts, are a testament to both Rega’s efficient fleet and capable medical staff – as is the organization’s nationwide popularity. Over the years, Rega has become a household name in Switzerland, where it has 3.2 million patrons (who, in exchange for donating, can have the costs for any Rega services they need waived, wholly or in part). Says Kohler, “The biggest honor and at the same time the biggest challenge is that Rega enjoys a huge acceptance in Switzerland. One out of three Swiss is a Rega patron. That fills me with great pride. At the same time, each patron has high expectations that Rega must fulfill.”

This story was originally printed in issue 27 of Experience magazine published October 31st, 2016.

Support the privately run nonprofit Rega foundation by making a one-time contribution (by credit card or electronic transfer) or by signing up for regular donations. The minimum amount to be a patron is CHF30 (US$31) per year for individuals, with discounts available for families. For more information, visit rega.ch.