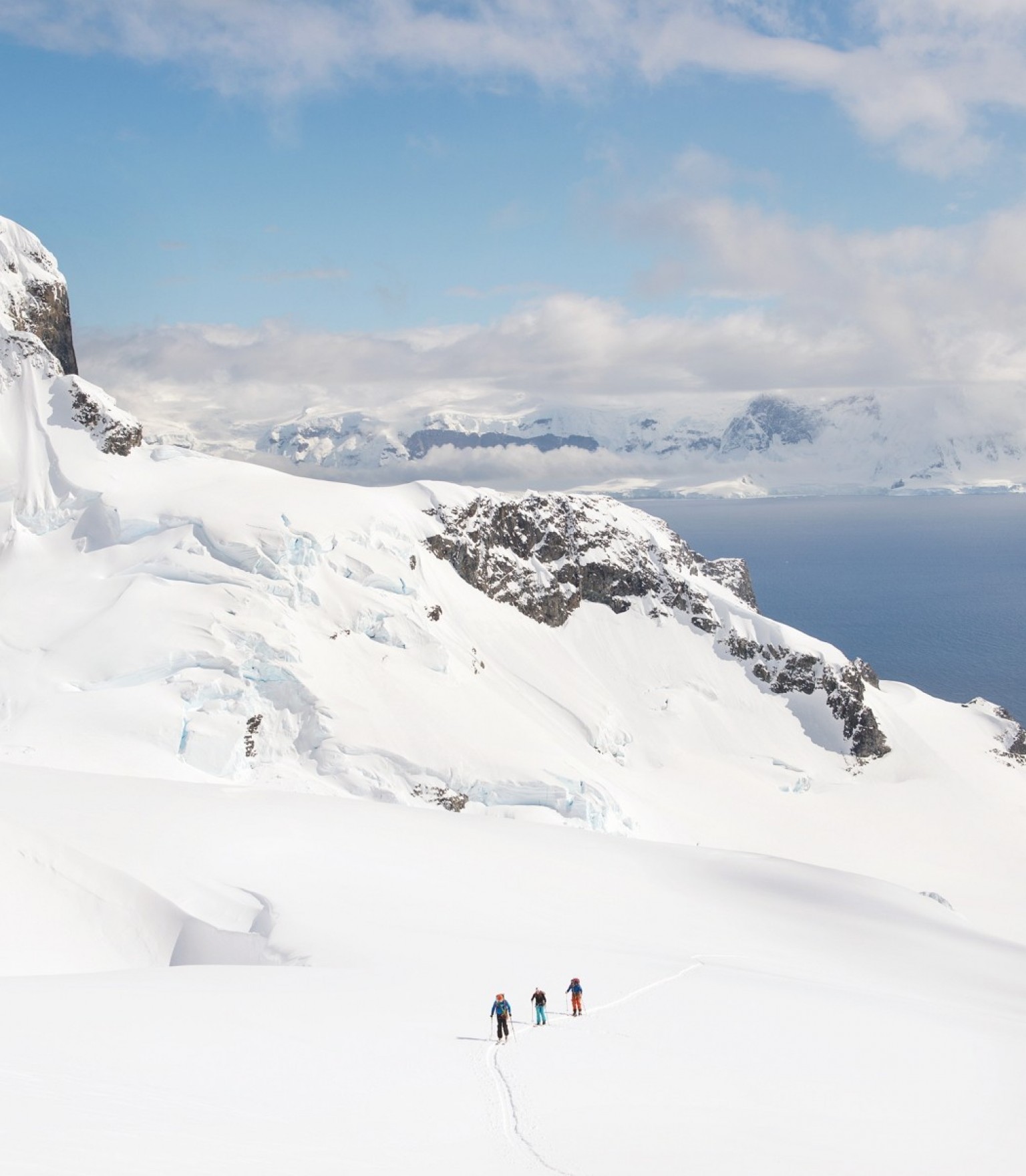 Antarctic skiiers brave Mount Tennant’s 2,300-foot (700-meter) climb for the thrill of its powder-coated ride down.

The crack of calving ice shatters the morning calm. Six heads swivel portside in time to witness a column of glacial ice tumble into the bay, sending out a semicircle of waves. Our driver twists the throttle and weaves the Zodiac among fridge-sized chunks of turquoise-colored ice, aiming toward the snowy shore of Rongé Island. The throaty calls of gentoo penguins, frisky with nesting-season energy, greet us as he nudges the inflatable between two boulders.

Few places fire the adventurer’s imagination like Antarctica. Ever since reading tales of pioneering South Pole explorers like Roald Amundsen, Robert Falcon Scott and Ernest Shackleton, I have been captivated by this frozen land where wildlife thrives against the odds.

With an area one and a half times the size of the continental United States, it has never been settled permanently by humans, save for the inhabitants of a few lonely research stations. It is owned by no state and governed by the Antarctic Treaty ensuring, at least for now, that the geopolitical disputes that plague much of the planet are set aside in the name of peaceful scientific cooperation.

As guests of One Ocean Expeditions, a company that specializes in polar cruises, we’re midway through an 11-day adventure on the Antarctic Peninsula, a rugged region jutting north of the white continent for 800 miles (1,300 kilometers). A few nautical miles offshore, the Akademik Ioffe, our home base in a 384-foot (117-meter) research vessel repurposed as a luxury cruise ship, sits anchored with its white hull glistening in the sun.

What’s brought us here is more than just spectacular sightseeing. For a lifelong skier like me, the least traveled of Earth’s continents represents a tantalizing final frontier of untracked mountains and glaciers – and we’re about to ride them.

Already it seems like weeks since I boarded the Akademik Ioffe in the Argentinean port city of Ushuaia, feeling tentative about what lay ahead – a 500-mile (800-kilometer) crossing of the Drake Passage. On the day of my arrival, a low-pressure cyclone had churned this notoriously savage stretch of water into a froth of heavy seas. Consequently, our veteran Russian captain delayed the departure for 12 hours.

The next morning we set sail on a gentle following sea down Beagle Channel. I soon met some of my fellow skiers, Frank Brummer from Illinois and Kyle Kinsey from New Hampshire. Kinsey’s goal is to ski on every continent. “I have two more to go,” he told me.

Together with our two Kiwi guides, we were a team of seven skiers and snowboarders, along with only 40 other passengers on board to pursue different Antarctic experiences – among them sea kayaking, snowshoeing and photography.

As menacing as the Drake Passage can be, the Akademik Ioffe proved a sturdy vessel, well-suited to riding out heavy seas in relative comfort. Staterooms with private showers, table service in the dining room, a lounge with afternoon happy hour, and a well-stocked library are enough to make passengers forget they are bound for a white wilderness that is the very antithesis of luxury.

After two days at sea, we reached landfall at Deception Island near the northern end of the Antarctic Peninsula. The full meaning of “the earth’s most remote continent” sank in: a people-less landscape where glaciers end abruptly at the sea in 164-foot (50-meter) high ice cliffs, and peaks like Mount Jackson soar to more than 9,800 feet (3,000 meters).

Today we turn our attention to Mount Tennant, 2,300 feet (700 meters) skyward. The Zodiac unloaded, I sit on my backpack and begin shoehorning feet into ski boots. The air is ripe with the odor of penguin guano. A sole gentoo, one of only four species of penguin that breed in Antarctica, waddles up Charlie Chaplin-style to inspect our group.

“Everybody tooled up and ready?” asks Tarn Pilkington, one of our guides, clicking his ski poles together.

Ice axes strapped to backpacks and climbing skins adhered to the bases of boards and skis, we fall in behind him as he breaks trail through a dusting of fresh snow. Once out of earshot of the chattering gentoos, a sense of isolation and insignificance sets in. Cold ocean extends to the northern horizon, while infinite mountains and jumbled glaciers unfold toward the South Pole.

As we trudge upwards, I ponder the great race for this geographic prize that galvanized the globe a century ago. On December 14, 1911, the stoic and practical Norwegian Roald Amundsen reached the Pole with his team, prevailing in a bitter contest with Englishman Robert Falcon Scott – who arrived a month later only to find the red, blue and white flag of Norway fluttering defiantly in the cold air.

“Wild, just wild,” I hear Brummer behind me, commenting with his American Midwest drawl on our icy surroundings rippled with crevasses, granitic peaks piercing the blue sky.

“Last week I was literally peeling the price tags off my gear as I was packing for this trip,” says Brummer, who is new to backcountry boarding. And though you needn’t be an extreme athlete to do it, a mountain ascent on skis, without the advantage of chairlift, helicopter or snowcat, requires a high level of fitness and endurance – something I try not to think about as I follow the track meditatively.

As the glacier steepens and crevasses complicate the route ahead, the guides divide us into two rope teams for protection, just in case a snow bridge suddenly collapses. The sun burns intensely, so I pull a bandana over my face, leaving a slit for sunglasses. We carry on tethered together by a 0.35-inch climbing rope, conversation replaced by labored breathing.

It takes three hours to climb and weave around crevasses that could swallow a bus, and now we are on the gentle summit slopes. Suddenly there’s a loud echoing rumble, like thunder. My gaze is drawn to the bay and I spot an apartment-block-sized iceberg splitting in two. One half disintegrates into thousands of fragments; the other stays intact, rolling over to assume new stasis.

Though climate change seems implausible in such a frozen world, research indicates that the ice shelf before us that once extended hundreds of miles from the continent into the sea is in rapid retreat. Dramatic disintegrations of the polar ice, like the one we just witnessed, tell the story of modern Antarctica.

Ten minutes later we’re basking at the summit, chomping for turns. We peel off climbing skins, while drinking water, munching chocolate and reapplying sun block. Pilkington leads off, instructing us to stay left of his tracks to avoid a tangle of seracs, blocks of unstable ice formed where a glacier flows over a convexity in the bedrock beneath.

The clear visibility and bonus springtime fresh snow make for dreamy skiing. I carve fast swooping turns in the boot-deep powder – feathery snow crystals sparkling in clear air – and aim for where Pilkington waits. Brummer sets off, using poles for balance and exhibiting the utilitarian style expected of a snowboarder rooted in the flatlands of rural Illinois.

Sixteen-hundred vertical feet below us in the bay, the Zodiac leaves the ship bound for our scheduled pickup. From our lofty vantage, the Akademik Ioffe looks like a miniature and, I must admit, reassuring beacon of civilization in this vast landscape. We have time for another lap on the upper slopes, and so in 15 minutes are back at the top staring down at untracked snow. On the day’s last descent, our guides pause only to regroup and thread carefully among crevasses before the final slope drops us back onto the glacier’s terminus.

The Zodiac driver is waiting for us, snapping photos of penguins, mesmerizing birds that can seem uncannily human in their black and white feathered tuxedos.

As we clamber up the gangway, a voice on the intercom announces the outdoor hot tub and saltwater plunge pool are open for business. I swap ski clothes for bathing trunks in my cabin, throw on a bathrobe and descend to the lounge where Ian Peck, the gregarious bartender from Nova Scotia, Canada, cracks open a can of his homeland’s Moosehead beer for me.

In minutes I’m easing ski-fatigued legs into 104-degree Fahrenheit (40-degree Celsius) water. I tilt my head back and gaze overhead. I haven’t seen a jet’s contrail since leaving Argentina. Not only is the Antarctic continent remote, even the sky above it feels wild, untraveled. I climb out of the Jacuzzi, and head over to the plunge pool, a blue tank filled with 10 feet of frigid saltwater. I grab the ladder rungs, inhale deeply and, after a couple of false starts, submerge myself in a bone-chilling baptism that lasts mere seconds. I scamper up the ladder, gasping as I sprint to the hot tub. A burly Russian deckhand watches me, shaking his head and laughing. I take that to mean I’m either a wimp or crazy.

“You are the first generation of Antarctic visitors who can realistically plan on gaining weight during your voyage.” – Site Guide to the Antarctic Peninsula

Later, the dining room is boisterous with passengers energized from a sunny Antarctic day. I sit down to roasted chicken and tortellini in gorgonzola sauce, washing down the replenishing calories with a crisp glass of Chardonnay. The repast reminds me of something I read last night in the introduction to the Oceanites Site Guide to the Antarctic Peninsula: “You are the first generation of Antarctic visitors who can realistically plan on gaining weight during your voyage.”

Indeed it was only a century ago that explorers risked life and limb to unlock the white continent’s secrets. Denise Landau, next to whom I’m sitting, didn’t put her life in peril when she first visited the Antarctic Peninsula in 1991, but she was equally inspired and hasn’t missed a season. She’s one of the knowledgeable onboard naturalists. Born in Michigan, this biologist and ski instructor was, for a time, executive director of the International Association of Antarctic Tour Operators.

Landau was instrumental in establishing operating standards to minimize the impact of the roughly 26,000 travelers who now visit Antarctica annually. Last winter the Akademik Ioffe played host to the first ever floating Polar Conference, aimed at finding ways to preserve the continent for future generations. It’s a topic close to Landau’s heart. For her efforts, colleagues rallied to have a glacier named after her. “You usually have to be dead for that kind of honor,” Landau says with a laugh, while we savor the last of the panna cotta.

After supper I climb to the observation deck, to watch the sun set as the ship sails north up Gerlache Strait beneath the eternal dusk of late November in the far south. The mountains glow pink – a landscape photographer’s dream – and the soft light reveals infinite textures of icebergs carved by nature and sitting motionless in the strait.

Already I’m anticipating what tomorrow morning will bring when the Zodiac driver delivers us to another frozen shoreline and another mountain to ski in Antarctica, a place much more accessible than it was when pioneering explorers raced for the South Pole, but no less beautiful, alluring and wild.

This story was originally printed in issue 27 of Experience magazine published October 31st, 2016.