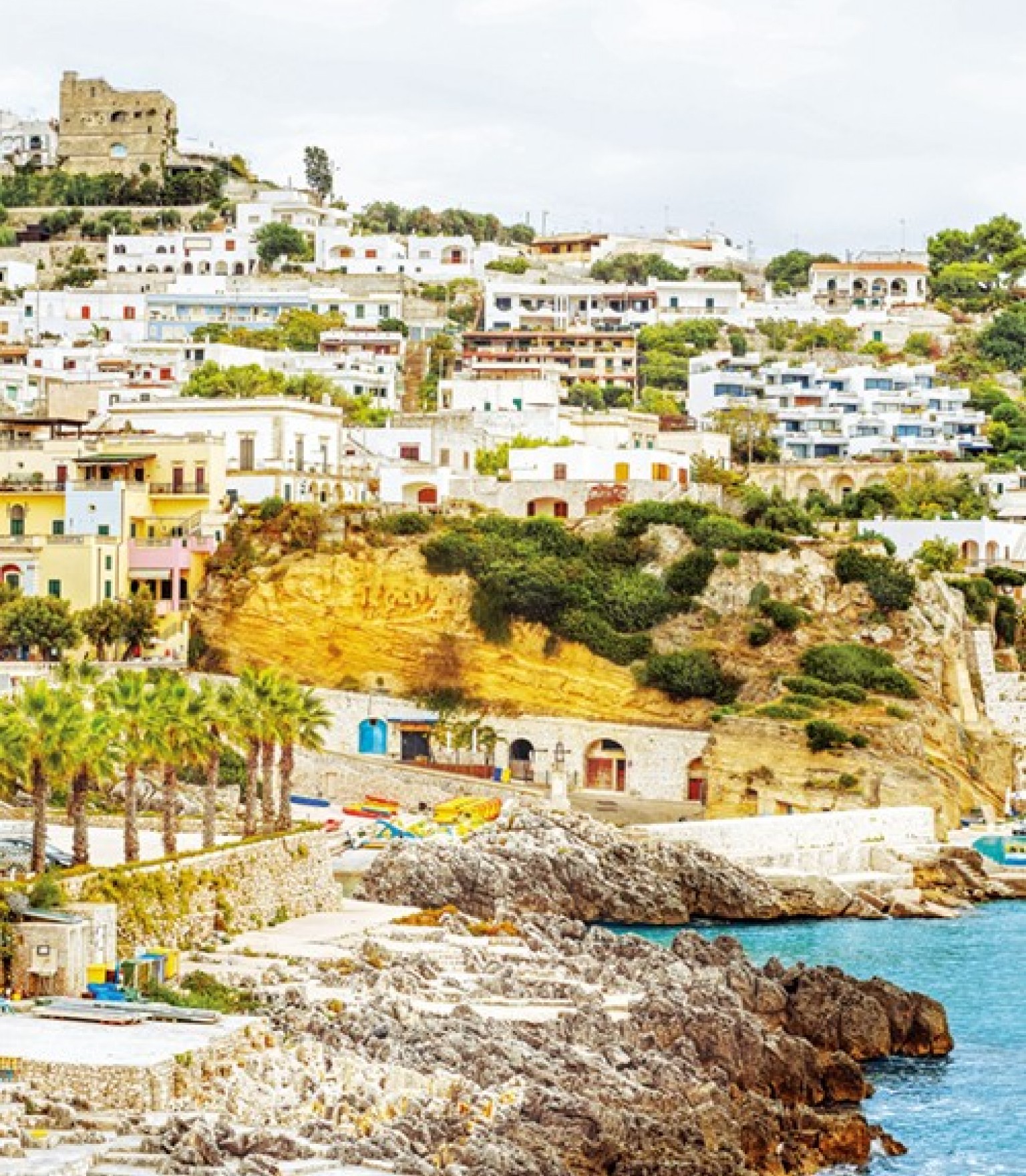 Biking through the orchards of Puglia, along tiny verdant roads that wind through the rolling countryside, the scent of olives is everywhere. It spices the air with green and peppery notes and serves as a reminder that in Italy, food is as ubiquitous as oxygen. Here, the surrounding trees all look ancient (and indeed some of them are), and colorful mesh nets are cast below the twisted, knotted trunks to catch falling fruit. In the distance, separated by lengths of dry stone walls, vegetables poke their heads from the ground—thousands of fennel bulbs and turnips eager to be picked. It’s like passing through a living, breathing produce market.

It’s fitting that Puglia is known as “Italy’s breadbasket.” Located in the southern part of the country (the spur and heel of the boot), sandwiched between the Adriatic and Ionian seas, the region is responsible for much of the country’s food production. With large swaths of iron-rich farmland, it offers adventurous and hungry travelers the chance to try authentic dishes in a sprawling collection of historic towns and coastal villages. To sample the region’s finest ingredients can be a daunting task as Puglia is like an endless share plate of experiences. The best way to truly appreciate the richness of Puglia’s cities and towns is to map out your visit—bite by bite.

Situated in the heart of Puglia, the Itria Valley is a fertile landscape dominated by hectares of olive trees. It is here, right outside the town of Fasano, where you will find Masseria Salamina. Built as a residence for 17th century nobility, the stone farmhouse has been the De Miccolis Angelini family’s home for over 30 years.

“This land has produced olive oil for centuries,” says owner and chef Chiara De Miccolis Angelini, whose family extracts thousands of gallons of liquid gold every year on their 60-hectare property. In the early 1990s, her parents converted the farmhouse’s stables into lodgings and today she runs the place with her brother Filippo, regularly leading guests in cooking classes.

“When selecting the best olive oil, we look for three positive attributes,” she says. “We want something that is bitter, pungent and fruity.” It’s only batches with these attributes, and no defects, that can be called extra virgin. A batch with even one small defect must be classified as virgin, and anything with more than three is considered lampante, or lamp oil.

The De Miccolis Angelini family harvests a number of varietals—Ogliarola, Leccino, Frantoio and Coratina—on their property and although they may look similar, each variety has its own subtle taste, some spicier than others. “We have thousand-year-old trees on the grounds that we can still make extra virgin olive oil from,” she says. “It doesn’t matter if a tree is 10 years old or 2,000 years old, the quality remains the same.”

What really matters to De Miccolis Angelini is that the oil is extracted within 12 hours of the fruit being picked. During extraction, De Miccolis Angelini makes sure the oil stays at 26 degrees Celsius (79 degrees Fahrenheit) or lower. Any higher and it will alter its aroma and flavor. “The shelf life of extra virgin olive oil is very short,” she says. “You want to make sure you use it within a year of production.”

Walking into the town of Alberobello is like traveling back in time. Even though much has changed since the 14th century when the village’s trulli homes were first built, the gleaming limestone huts with conical roofs populate the hills like mushrooms and make visitors feel like they are stepping into a bygone era. Small family-run shops such as Il Pozzo Illuminato, praised by style bible Harper’s Bazaar, sell terracotta ceramics and handcrafted linen for the kitchen. Filet lace is a well-practiced craft of the area—the elegant needlework showcased on tablecloths and napkins is a reminder that food, art and life are deeply intertwined here.

Outside of the shops, villagers are eager to show you how they eat by closing down streets and setting out long tables to serve an authentic meal cooked by the village nonnas on special occasions. Although there is a Michelin Plate restaurant in the center of the town—a magical spot called Il Poeta Contadino that serves dishes such as breaded snapper with burrata cream it’s doubtful you’ll get a dish as comforting as the one the nonnas prepare: orecchiette con cime di rapa. The plate only has a few ingredients, but that’s all it needs: rapini, anchovies, garlic, olive oil and fresh orecchiette—the pasta of the region, so named for its resemblance to little ears.

According to Davide Sansone, a chef from the small village of Cassano delle Murge, this is typical of the delicious local methodology. “If a plate has more than five ingredients—it’s not Pugliese food.” This philosophy is rooted in the region’s culinary tradition of cucina povera, which essentially means “peasant food.” Traditionally one of Italy’s poorest regions, Puglia’s regional cuisine focused on transforming whatever was affordable or on hand to stay fed—a practice that still plays a role in the way they cook today.

Long before the hot Italian sun begins to hit the ancient whitewashed buildings in the nearby town of Ostuni, Antonio has collected the milk from the cows. You can see the large beasts lingering outside the Masseria Fragnite, lazing about and eating hay. It is here where Antonio has been working for the past 30 years, daily turning raw milk into light pillows of cheese.

“Because Puglia is hot, we tend to make more fresh cheeses like burrata, mozzarella, ricotta and primosale—cheeses to be enjoyed in the moment,” says Davide Frulloni, a former chef who leads cycling adventures in the region for tour operator DuVine.

“Burrata is the patron saint of Puglia’s cheeses,” Frulloni adds, as Antonio takes a chunk of fresh cheese curd from a nearby table and adds it to a large steel pot along with some salt and boiling water. The mixture is opaque and still separated. “It’s like with bubble gum,” he says. “You can’t blow a bubble right away. You have to chew it first.”

Antonio takes out a long wooden board and begins to stir the mixture, sweetness rising in the air. After a few minutes, the cheese, water and salt begin to amalgamate and Antonio turns it into a stretchy paste. Once the texture is right, he pulls off a piece and creates a little pouch that is stuffed with stracciatella (small shreds of cheese) and thick cream for guests to eat.

The actual color of burrata reflects the shades of Ostuni’s own architecture. Deemed La Città Bianca (the White City), the town is rife with must-visit structures that are cream and cloud colored, including the intricately designed Palazzo Vescovile (with an arched loggia dating back to 1759), a 15th-century Gothic cathedral and the remains of the defensive walls that wrap around the old town.

Near the Adriatic, close to where the Alimini Grande and Alimini Piccolo lakes meet, the growers at Menhir Salento tend their vines. “Our ancestors rarely planted vineyards in this part of the region as the soil was difficult to work with,” says enologist Marco Mascellani. “When we started in this area, we thought about what we wanted to achieve: elegant wines in a region of muscular wines. We knew it would cost more but it was results that mattered.”

Menhir Salento’s indigenous grapes have adapted to the area’s high average temperatures and poor rainfalls, creating a flavor like no other. “Primitivo, together with Negroamaro, are the most important varieties of Salento because they’re versatile. In fact, we can produce rosé wines, young reds, structured reds for aging, as well as sparkling wines from the same grape.”

As the second-largest wine region in Italy, Puglia has often played second fiddle to Tuscany with its exports. The tide, however, seems to be turning, with acclaimed producers like Vetrère, who produce award-winning bottles with nothing but clean energy, and Valentina Passalacqua, whose natural biodynamic wines grace the lists of world-renowned restaurants.

“Puglia is steeped in tradition,” says Mascellani, “but we believe that fusion and variety are the spice of life.” Enophiles will want to sample the bottles at the producer’s winery in the nearby small town of Minervino di Lecce. Located in a baronial palace dating back to the 18th century, their stone headquarters are also home to Origano Osteria, a farm-to-table restaurant that serves traditional Pugliese food (like braised veal cheek or seared octopus). The primary focus, however, remains the wines, with light refreshing whites like Pass-O Fiano or powerful reds like Numero Zero Negroamaro accompanying the dishes.

During the 12th Century, it was a sacred tradition for the Knights Templar to travel to the commune of Santa Maria di Leuca to pray before heading off to the Crusades. This is the spot where St. Peter first touched down in Italy, in the southernmost part of Puglia, commemorated centuries later by the construction of the Basilica Sanctuary of Santa Maria de Finibus Terrae, a sacred space that visitors need to book weeks in advance to tour.

Today, people journey south for a different kind of religious experience. They’re looking for pasticciotto, a shortcrust pastry filled with lemon custard. According to legend, the dessert was created in 1745 when pastry chef Nicola Ascalone was looking for something to feed pilgrims traveling to the region for the feast of St. Paul. Finding an excess of pastry and custard in his kitchen, he combined the two, baking them in a small copper mold.

The Martinucci Laboratory is where you will find some of the best takes on the classic. Founded in 1950 by Giovanni Martinucci and his son Rocco, the bakery has more than a dozen locations in Salento, each one offering visitors a taste of the original or a modern version made with black cherry, gianduja chocolate or pistachio.

“The best way to enjoy pasticciotto is when it’s still warm,” says Frulloni, who prefers to have his for breakfast along with a cappuccino. “Two hours out of the oven.” Although this sentiment is quite hard to fathom in most major cities in North America—where food is often pre-made and shelved for days—it is par for the course in Puglia. If any region illustrates the importance of eating Italian-style—aka treating the taste buds with reverence—it is here.

Specialists in food and wine, cycling tour operator DuVine’s local guides intimately know the terrain they cover, carefully crafting culinary excursions that give visitors a taste—both literally and figuratively—of the best a region has to offer. In Puglia, start your day with a hearty farm-fresh breakfast in your sumptuous converted farmhouse before heading out for a tour of rolling farmland, Roman ruins and dramatic cliffs. Come lunch, visit a Pugliese family in their trulli home where the matriarch fills up a long table (and your tummy) with fresh burrata, homemade capocollo and focaccia. With tours for different skill levels—and those looking for private excursions, or trips with friends or family members—both novice and avid cyclists can partake in authentic food and cultural experiences on five continents. And even if you’re eating and drinking along the way, you won’t need to worry about accumulating excess calories when you’re cycling for hours a day.