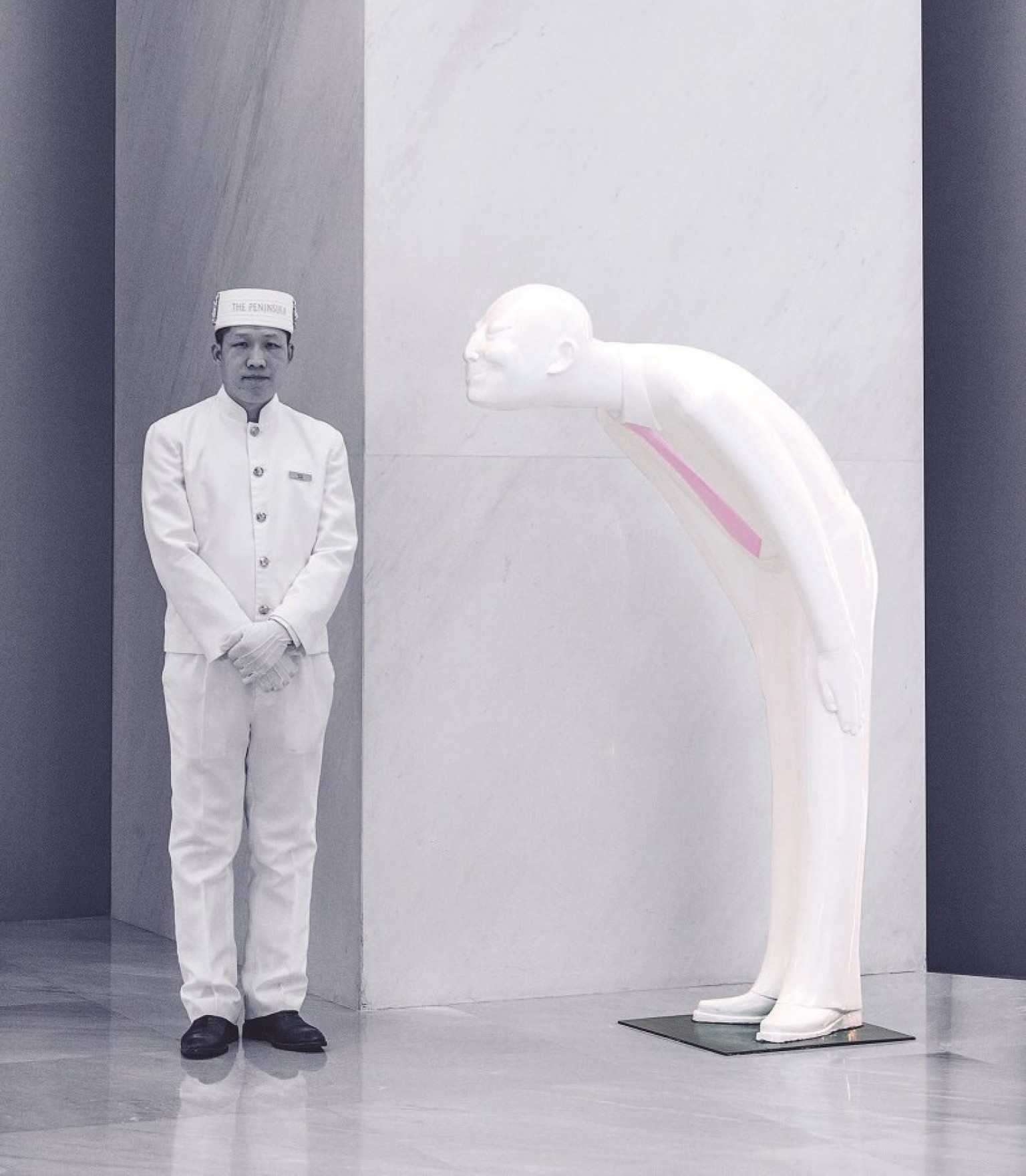 A greeter in a white coat stands before one of Gao Xiao Wu’s fiberglass creations.

Three white-coated greeters man the doors of the Peninsula Beijing, but only one is human. The other two gentlemen, with the amusing grins and pink neckties, are fiberglass creations by renowned sculptor Gao Xiao Wu.

To say that art is everywhere in this city of 22 million is not a stretch. The majestic Forbidden City, which will mark its 600th birthday in 2020, is home to the Palace Museum, three times larger than the Louvre in Paris. The country’s best art schools are also here: the Central Academy of Fine Arts, and the Academy of Arts and Design at Tsinghua University.

Local arts and culture festivals are thriving, and there are many private tours ferrying collectors to artists’ studios and districts. The 798 Art District alone has more than 200 galleries, including international outposts of New York’s Pace Gallery and Galleria Continua from Italy.

“Beijing has over 10 great art museums, all well worth visiting,” says Meg Maggio, a Boston native who opened the Pékin Fine Arts gallery in 2005. “All major luxury hotels and office towers in China have public art displays, if not permanent collections and private museums.”

The reason the art scene is so strong in the country’s capital is, like so much in Beijing, a blend of past and present. “Artistic heritage is a priority here, and comes naturally from the Palace Museum’s legacy and the long traditions of painting, calligraphy, Buddhist temple sculpture, seal carving and arts and crafts generally,” Maggio explains. “China’s ancient culture prioritized the arts, music, theater and dance. And these traditions are being revived and supported both by the state and at the grass roots level.”

The number of artists in Beijing alone is “in the tens of thousands,” says Brian Wallace, an Australian who opened Red Gate Gallery, China’s first private contemporary art gallery, in 1991. “About an hour outside of Beijing is what they call ‘the village of 10,000 artists’—Songzhuang—where every second person is an artist.” It’s not just the prevalence of art that is remarkable, however, but the quality, which Wallace says is the result of outstanding education. “The schools are fantastic,” he stresses. “Everyone recognizes the technical skills of the artists across all media because the basic skills have been ingrained through very rigorous teaching and training. The drawing and sketching skills are there even before students get into the universities.”

As far as imagination goes, the breadth of work is just as varied and exciting as anywhere, with the enormous change and rapid development of the last 30 years creating a deep well of inspiration. “The thread for all the interesting contemporary Chinese art is the commentary on what’s happening here in China,” remarks Wallace. “That’s been the great thing since the ’80s and reflects what is going on in general—the personal freedoms that people have now are just incredible, even though the current leadership is trying to wind it back a bit.”

“The artists know how far they can go,” he adds. “And it can be very subtle as well. Or sometimes the work is just purely beautiful. It may not be political, it may not be a stinging commentary. It could be about the artist’s own inner workings.”

For some, inner workings have been a commercial gold mine, especially during the contemporary art boom the city experienced in the mid 2000s.

On a private tour arranged by the Peninsula Beijing as part of its Academy experiences program, sculptor Gao allows guests into his expansive studio, which is more like a sprawling series of industrial units. He smiles broadly to reference how he trained himself to “wear a mask to be part of society”—inspiration for the bowing figures in the Peninsula’s lobby. He talks about using antlers that resemble tree branches to signify rebirth and explains that a giant newborn, curled as if fresh from the womb, was conceived after the birth of his daughter. The lion statues used to ward off evil as far back as imperial times are more playful than ferocious in Gao’s hands. “Young people don’t respect these traditional symbols so I make lions look like personal pets.”

A visit to the home of Wu Qiong, whose work is also displayed at the Peninsula Beijing, provides a fascinating glimpse into a complex personality. Inside the house, birds sing and water murmurs in a koi pond. Figurative paintings in pastel hues look sweet enough to illustrate a fairytale and Wu’s popular “Tattoo Boy” sculptures all have expressions of wonder. But there are also dark moody paintings from Wu’s school days that seem at odds with the innocence depicted in his current work—until Wu explains the reason most of his characters have closed eyes. “They are in a dream world, because that is much happier than the real world.”

As carefree as many in Beijing seem, there are undercurrents not always evident to an outsider. Wu was born in 1981—five years after the Cultural Revolution ended—but the generation before him was greatly impacted by Mao Zedong’s policies of harassment and destruction. Older artists almost certainly would have had devastating personal experiences, Wallace says. “God knows what their families went through.” Or, as in the case of Nong Shaohua, who Wallace represents, they may never have had the opportunity for an art education. “He is 59, self-taught and only working as a painter six or seven years. He worked in the coalfields of Shanxi province. He’s led a really poor, tough, gritty life and that’s the imagery that he is getting out of his system.”

Wallace is one of many Beijing gallerists who decamp each March for Art Basel Hong Kong, which was first held in 2013. With a mix of homegrown and international artists, the art fair has made it easy for the mainland audience to see far more work and develop their tastes, Wallace says. That exposure to Western art as well as fashion, jewelry and other forms of design, has created a more sophisticated population that is starting to look beyond global brands to its own creators. In February, Business of Fashion reported that Chinese brands Nanjiren, Bosideng, Bauo and Chando beat out pricier foreign players as the top-selling brands on Alibaba-owned e-commerce platform Tmall during this year’s Spring Festival shopping sprees.

Similarly, Chinese artists are enjoying a surge of acclaim at home. “They are not looking outward as much for validation, as the domestic market has markedly matured and grown,” Maggio says. Still, names such as Qiu Zhijie, Liu Wei, Zhang Xiaogang, Cao Fei and Zeng Fanzhi are regulars on the international art scene, having participated in major biennales and exhibited at museums such as the Guggenheim, Centre Pompidou and Tate.

“I rarely enter a major Western collector’s home without noting an artist of Chinese and/or Asian ethnicity in their collections,” Maggio says. “The world no longer collects according to geography nor ethnicity. Artists exist in a globalized world.”

Where to see the best contemporary art in Beijing

The options for enjoying contemporary art in Beijing are plentiful, but be sure to factor heavy traffic into your plans. Time Out Beijing and That’s Beijing provide details on current exhibits and major art fairs.

The 798 Art District is a must not only for the Bauhaus architecture, the fashion obsessed gallery goers, and the refreshing indie vibe. The art runs from commercial to conceptual, with everything in between.

Widely considered China’s best art school, CAFA is home to an art museum designed by Arata Isozaki (who did MOCA Grand Avenue in Los Angeles) that is worth a visit for the architecture alone.

MoCA Beijing is located in Songzhuang, “the village of 10,000 artists,” which holds its own annual arts festival in the fall. Year-round exhibits are often done in partnership with international museums.

NAMOC’s mandate is to collect, research and exhibit historical and contemporary Chinese art, though its collections also include imperial works, costumes and kites.